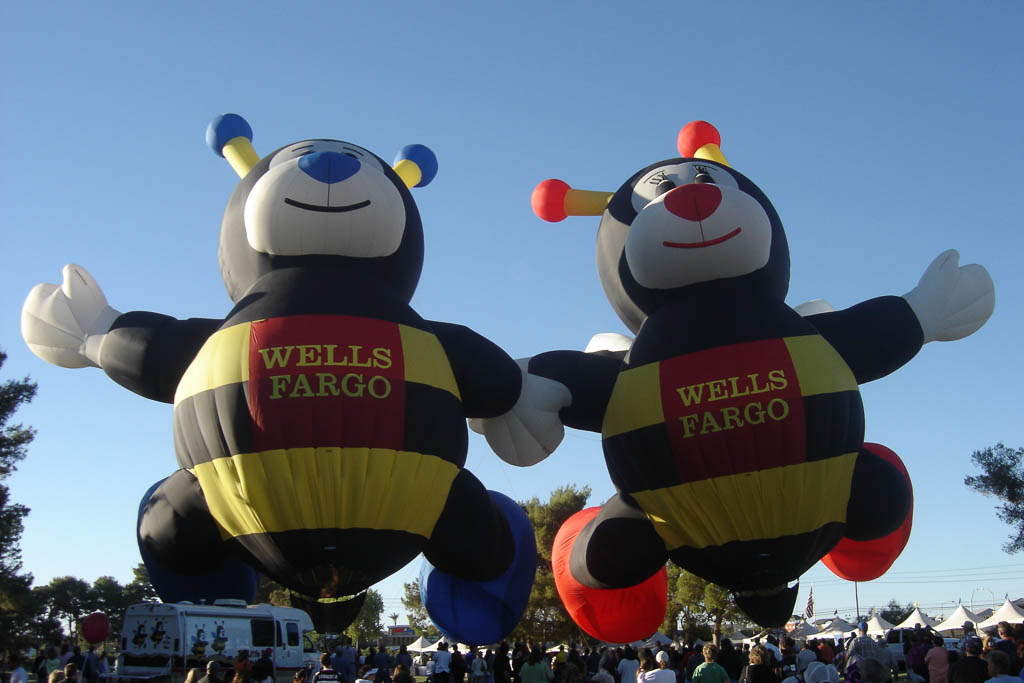 After having a wonderful time Friday night we awoke early this morning to head off to the mass ascension that was scheduled to start at 6:30. This required me having the alarm set to go off at 5:00. I know an alarm clock on a Saturday and I agree. It should be against the law. I should call my congressman. Of course I snoozed until about 5:30. I turned on the TV and noticed the winds were up to about 10-15 mph. Immediately I started thinking, ‘Well they aren’t going to fly today so I will just go back to sleep and go tomorrow.’ These thoughts were followed by, ‘If I don’t go then I will always regret it.’ You know which side won.

The trip to the park was much quicker then the trip on Friday. We arrived bright and early at 6:30. Nice thing was that none of the crews weren’t even setup yet. So Lexi and I wandered around the three different launch areas they had setup. Eventually we arrived at ‘Launch Zone 2’ where the first picture here was taken. She is looking awfully chipper for 7:00 in the morning. As you can see she fits her new little jacket perfectly.

During this time there was a couple getting married in a gondola of one of the hot air balloons. They lifted off just briefly. This of course is due to the winds again rearing their ugly heads. This caused most of the balloons to inflate just enough to stand completely upright then being taken back down anywhere from 5-10 minutes later. Watching these balloon crews it is totally understandable. The winds at times were getting pretty tricky and the balloons would start to lean at nearly a 45 degree angle. It was funny to watch all these people scramble as the balloon would slowly tilt their direction.

We continued on to another launch zone where we came across these additional balloons going up. I decided I would take a break to watch the balloon crews and snap a couple more photos. She is starting to get more and more photogenic. The second picture here I actually told her to look at me and say, ‘Cheese.’ Well she did and this is the result. I attempted to get her to take a couple more but I think this is the one that turned out best.

After sitting in her chair watching the going ons I decided I would get her out to stretch her legs a bit. Also I had an idea for a great photo op. There were a couple tree stumps near the area pictured here. I tried to get her to sit down on the stump while I took a picture. Well she didn’t want to have any of that and stood up and started charging me!! To go along with what I mentioned earlier about her being more photogenic. In this last picture I didn’t tell tell her anything, she saw the camera and just started smiling. She just thinks the camera is a great thing.

After the balloons went up and back down we headed back over to yet another launch area. Actually I think this would be considered more a stage area. You see there are several concert events scheduled to take place during this event as well and they had a full concert stage setup. They had a couple more standard balloons going up in this area as well. Additionally I took more photos however, I don’t feel any of these turned out nearly as good as the ones I have presented here. She was just so good the entire time!! She would just look around and point and smile. It really was a great, good fun time.

On the opposite side of the field they had the only special shape balloons that I saw at the event. Lexi couldn’t get enough out of them. It was pretty impressive to see the crews keep these balloons up for as long as they did. I think they stayed inflated for over 15 minutes even with the relative high winds. I doubt any of these crews will ever come across this page. If they do however I just want to let them know how much I appreciate them coming out to just inflate and deflate. I can only imagine the amount of time and money it requires for these teams to come out to an event like this. All that to get here and have the wind not give you the opportunity to fly.

Back to the show. After watching the little bees go up it was time to get some breakfast. The local Elk’s lodge was putting on a pancake breakfast. I ordered breakfast and was told, ‘When they are ready they will call your name.’ I figured no big deal it shouldn’t be to long. You see Dawn and I would regularly go to pancake breakfasts in Hobbs and it in, get your food and eat in no time. Here though it was nearly 10 minutes before I heard the next name called. About 10 minutes after that I decided that I didn’t want to wait 2 hours to eat breakfast. I am sure that Lexi wouldn’t have let me get away with it either.

I decided it was time to leave and get some food. We headed up the street to an IHOP and had breakfast. Lexi was great and relatively well behaved. After breakfast we headed to our next adventure.