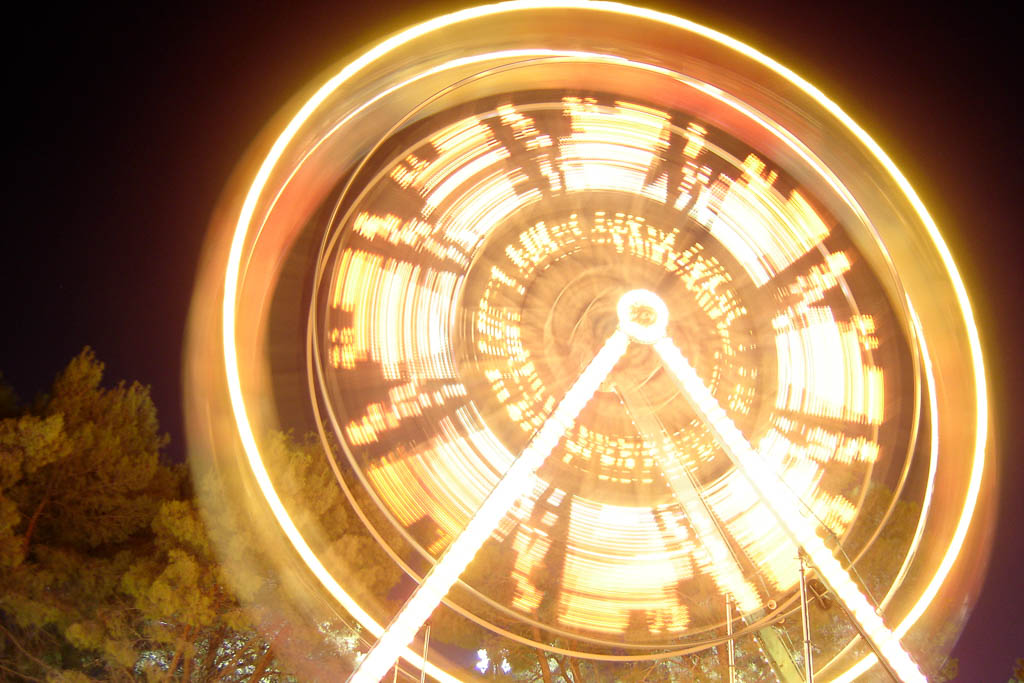 Fire and Lights on a Friday Night

Well we had a great time at Balloona Palooza Friday night. The only down side was that the winds decided they weren’t going to cooperate with the scheduled events. Scheduled to occur at 7:30 was a nighttime balloon glow. Unfortunately it seems that they had only a half hour of wind free time in order to do the glow. Of course this was a half hour before we arrived. So we missed out on the actual balloon glow.

Even though we missed the balloon glow the balloon crews were still around and not wanting to disappoint they were firing it up. We were pretty close as you can somewhat see here. Close enough to feel the heat though that is for sure!! Lexi just loved it. I actually got her saying, ‘Fire!’ Then once it was gone she would say, ‘All gone.’

On the plus side the balloons weren’t the only thing going on. Also available was a small carnival which is where I snapped this picture. This one took several attempts to get just the way I wanted it. I ended up taking a total of 6 pictures similar to and including this one. They were taken by telling the camera to keep the shutter open for 30, 10, 7, 4, 3 and 2 seconds. The one shown here was the 7 second exposure. Poor Lexi started getting impatient while I was waiting for the operator to unload and load passengers. I ended up waiting I would guess 15 minutes along waiting for wheel to get spinning again so I could get this picture. Also I observed 2 other individuals attempting to take a picture similar to the one I have here.

So after wondering around for better part of two hours I decided it was time to head home. So we left and headed for the nearest fast food joint. I know I should have enjoyed the great carnival food but I didn’t want to wait in line. Well we arrived at Wendy’s and I ordered some chicken nuggets for Lexi and just some fries and drink for myself. Then we headed for home. Of course I was giving Lexi nuggets and fries almost all the way home. I went to hand her a fry and she was just taking her time taking it from me. I looked around to take a look at her and she was out. Poor thing had a very busy day. Here are the results.