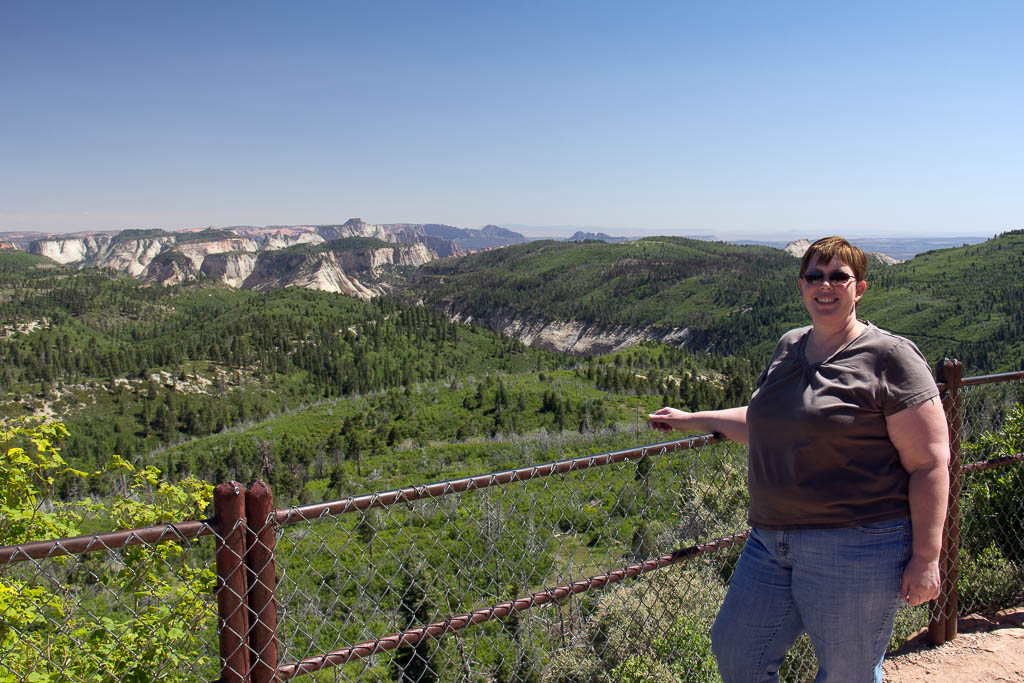 I must admit I was dreading the first weekend without Lexi. The last thing I wanted to do was sit around the house all day watching TV and surfing the internet. Thankfully I have a wonderful wife who is totally up for just jumping in the car driving a few hours just to take a look around. Since Dawn had some things to tend to on Saturday we chose to head up to Zion on Sunday instead.

We were up early, by weekend standards, and went over to The Cracked Egg for breakfast before leaving town. Since it was so early in the morning the place was practically empty compared to what we normally see it, especially on a Sunday. We made quick work of breakfast, jumped in the car and were off to Zion by 9:00 a.m.

I thought it would be a cool idea to retrace mine and Lexi’s steps from last weekend with mom in tow. This way she could see some of the cool stuff that Lexi got to see during our trip. We did make sure to go to some places we’ve never been before to make it more exciting.

The trip began with us driving to the Kolob Canyons entrance to Zion Nation park as we did last week. After a quick trip through the visitor’s center for souvenirs, we headed on up the scenic drive. The landscape was as amazing as it was the first time Lexi and I drove through. The weather was near perfect if not a little on the cool side. The visitor’s center had a posted high temperature 12 degrees lower than the weekend before. Quite a change only being a weeks time.

While driving the scenic drive I pointed out to Dawn all of mine and Lexi’s stops along the road; “There’s where we parked and the trail head”, “Oh I stopped here to shoot a bunch of pictures”, and “Here’s where we parked to eat lunch.” Having stopped at the Timer Creek Overlook Trail parking lot I challenged Dawn to hike out to the short trail with me. The entire hike out to the overlook and back was probably a little more than a mile. You can see a map of the trail below, but I forgot to start the GPS when we started so the start point is a little off.

After having our fun in the Kolob Canyons section we drove over to Kolob Reservoir and the Lava Point Overlook and Campground. Dawn got to see the rock that Lexi climbed out to in all its glory, witness the spectacular view from the Lava Point Overlook, and give the campground a thorough inspection and a special mom seal of approval. As with the scenic drive in Kolob Canyons, along the drive up to the reservoir I was constantly point out landmarks, scenery, and other interesting things I had told her about while going over the photos from our first trip.

When we finished at the Lava Point Overlook we both looked at each other and said, “I’m hungry.” We hoped back in the car and drove over to the main, touristy portion of Zion. I’m glad that we chose Sunday instead of Saturday for our trip. I had read that Saturday was National Get Outdoors Day and all National Parks were waiving their entrance fees. I can imagine that Zion was absolutely swamped with visitors. Luckily for us Sunday wasn’t nearly as busy.

We parked in the main lot near the visitor’s center and dropped inside to ask a few questions about the shuttle and the lodge. We learned that the shuttle fair is included with your entrance fee to the park, awesome, and that the lodge accepted reservations up until 9:00 so we had plenty of time to grab a bite to eat.

Having our questions answered we boarded a shuttle at the visitor’s center and proceeded up the road to the lodge. Maybe 15-20 minutes later we were off loading at the Zion Lodge. We headed on up to the lodge and made a b-line for the Red Rock Grill. Asking for a table on the balcony we got to enjoy the wonderful view, fresh air, and beautiful weather of upper Zion while enjoying our dinner. Dawn got the Bison Meat Loaf and I got the Anasazi Salmon. We finished dinner off with cheesecake for her and pecan pie for me.

Absolutely stuffed we boarded a new shuttle heading north further up the canyon. We went all the way to the top and jumped off at the Waterside Walk Trail trail head. I again convinced Dawn to walk with me up the trial a ways. I’d say we walked a little over a mile for the round trip, but it was absolutely beautiful. Walking back to the shuttle stop we spotted a mule deer just hanging around paying no attention to anyone eating dinner. I tried to get some pictures but she wouldn’t stop moving and it was getting later in the day and the light was horrible.

Thoroughly pooped, stuffed, and ready for bed we boarded a shuttle to head back to the visitor’s center and ultimately the car. We got back and hit the road at around 8:00 and made it home around 10:30 I’d guess. The drive back was really quick and we were lucky enough to be heading in the opposite direction of the insane EDC traffic.

Overall it was a great quick trip and a wonderful way to spend the day with my wonderful wife.